If there is one characteristic that exemplifies spring it is that of changeability and this year has been no exception. The weather has been as unpredictable as ever and the results leave lasting memories. The very warm, dry weather that lasted through March until the beginning of April was destined to change as soon as the hosepipe ban started and so it did with northerly airstreams bringing cold temperatures with occasional overnight frosts threatening to damage the fruit and berry crops of many trees and shrubs, which had been brought forward into bloom by the exceptionally warm conditions. This change also brought some long awaited rain, however by the third week of April this amounted to less than 35mm. However, in the bird world nest building and egg laying were well advanced and all but one of the garden bird boxes were occupied, mainly by blue tits. Much to our disappointment the nuthatch, that successfully raised a brood in one of the boxes last year, did not put in an appearance. 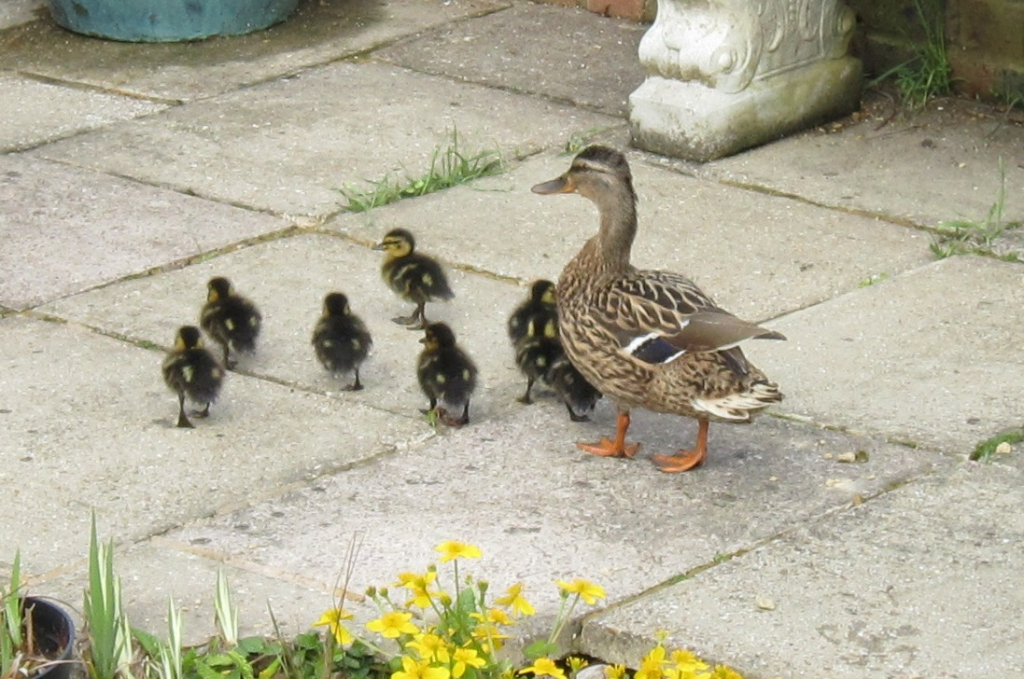 As usual in the breeding season the Mallard ducks, which for the rest of the year are normally glimpsed late in the day as they fly at high speed in small groups between the various ponds in the area, were suddenly much more in evidence. There have been numerous reports of female Mallards turning up in gardens or crossing village roads, ignoring both traffic and people, in the company of one or more drakes each determined to father as many new ducklings as possible. One particularly interesting sighting occurred at the end of the second week of April when a female Mallard with ten ducklings, probably no more than a couple of days old, entered the garden by the front gate and proceeded to waddle down the driveway before discovering the pond where they busied themselves hunting for food. But then within a short time they moved on hopefully to a more secure spot away from the attention of any passing foxes or one of the buzzards quartering the adjoining fields. The Mallard or Wild Duck (Anas platyhychnos), which is to be found throughout temperate and subtropical parts of the world, is the ancestor of domestic ducks and regularly cross-breeds with both domestic and other species of duck. The male Mallard is distinguished by its very recognisable bright metallic green, almost iridescent  head plumage and beak which is yellow with a black tip whilst the female has rather dowdy mid brown plumage with black patches.  Mallards can produce between one and two clutches of eggs each year usually numbering between 6 - 15 which incubate in 28 days. Initially, the ducklings are covered in a down which is yellow on the under-parts and black mottled with yellow above. After 50 to 60 days they fledge and then from three months of age they are ready to fly.

Along ditch sides, road verges and footpaths throughout the village there are patches of bright, golden dandelions, large clumps of ladies smock sometimes mid pink, sometimes almost white interspersed with the last of the glittering yellow stars of lesser celandine. Out in the woodland bluebells are coming to their peak mixing with the last of the paper-white bells of wood anemone and in damper spots can be seen the delicate spikes of the common spotted orchid. Such sights are the memories of spring.