The last year did not give us much to sing about with 2012 going down as the second wettest year on record. Meanwhile climate change experts have been forecasting an increase in the incidence of dry springs with wet summers and winters however, contrary to their previous forecasts, the recent announcement of global temperature trends has shown very little change over the last fifteen years.

Despite the wet weather fungi were well in evidence during the late months of the year although not as prolific as 2011. The large circle of trooping fungus on the common, just off the top end of Millers Lane, did not make a complete ring and the fungi were smaller than last year. Temperatures remained on the mild side over Christmas and the New Year and in protected spots, by early January, hellebores, glistening snow drops, delicate pink cyclamen and the butter yellow winter aconites were coming into flower. Away from the gardens Gorse bushes on the north side of Brickfields Road were wreathed in rich, golden flowers by mid January however, the Winter Heliotrope (Petasites fragrans), had started flowering in mid December. This plant is a member of the same family as Michaelmas daisies and is also known as Butterbur or Sweet Coltsfoot. As the name implies, the pale lilac flowers on a stem up to 30cm in height, smell of vanilla and the leaves are heart or kidney shaped. The plant originated in the Mediterranean area and has spread throughout northern Europe. It is believed that it was introduced to gardens in the UK and over time plants escaped into the wild and are often seen on roadsides and other damp places. In Outwood they can be seen on the banks of the stream on the south side of Millers Lane to the right of the entrance to Brightleigh Farm. The plant is dioecious, meaning that individual plants are either male or female. This is not that unusual however, a curious fact is that all the plants in the UK are male and it is therefore a bit of puzzle as to how they have spread. The best guess seems to be that the fleshy roots are easily disturbed and have been moved around by animals such as wild boar and deer or could it have been country people who, in times past, were said to use the roots, which contain the drug petasin, as a cure for headaches. 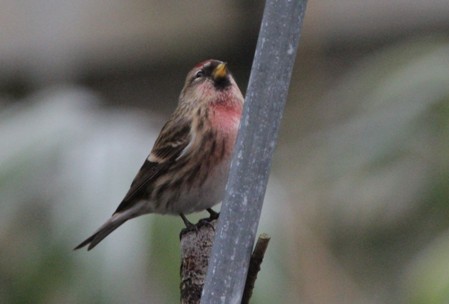 I've received a couple reports of sightings of Linnets and Andrew Eldred has kindly provided a beautiful photograph of a male bird which regularly visits the feeding station in his garden, often with a female. The Common Linnet (Carduelis cannabinum) - the English name is from its fondness for flax used for making linen and the Latin after its liking for hemp seed - is a member of the finch family and is about the same size as a robin. The male has a mixture of brown, fawn and black feathers with a crimson crown and breast, not present in the female, which is altogether browner. The species is partly resident in the UK, however, the population has declined by nearly 70% over the last forty years due to herbicides and over aggressive hedge-cutting. As a result of their beautiful, melodious song they were very popular during the Victorian period when they were kept as cage birds and were often referred to in verse by poets such as Wordsworth. The bird also features in that old music hall favourite "My old man said follow the van", sung by Lily Morris, which includes the words "And I followed on with my old cock linnet".