One of the great secrets of nature is its ability to adapt and it certainly has done so this year following the total washout that was last summer and the very cold, late winter and spring. Trees, shrubs and flowers whether in the garden or the countryside have been, on average, three weeks behind. However, as soon as the weather warmed nature adapted and plant growth seems to have been accelerated. Hedges have grown at a faster rate than I can remember for many years and flowers have been abundant; hawthorns have been cloaked in their white and occasionally pink blossoms, elders have been smothered in their cream coloured, sweet smelling blooms so reminiscent of childhood, summer picnics and wild cherries or geans have flowered profusely with their falling, white petals scattered across footpaths and bridleways like confetti. Last year will also be remembered for poor, and in some cases completely absent, crops of fruit but one again nature has adapted and this year promises bumper crops of apples, plums and soft fruit from gardens and blackberries, hazelnuts and sloes from the hedgerows.

Birds that are resident all year have been busy incubating their clutches of eggs and chicks have been fledging. Migrant birds have, however, been late in arriving and in many species their numbers are greatly reduced. Cuckoo numbers seem to get smaller every year and that iconic bird call is now becoming a rarity. I spotted swallows, for the first time this year, flying around the village at the beginning of June and as the strong, cold, northerly winds abated in the third week of the month they reappeared busily catching insects on the wing before settling briefly, together with house martins on the overhead power cables. 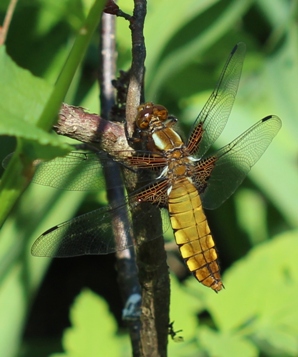 The warm weather has brought forth hatchings of butterflies such as red admirals and peacocks although the large whites, which are the bane of gardeners cabbage crops, have yet to put in an appearance. Damsel flies in red, blue and green forms have been very active around ponds and streams as have the dragonflies, which are closely related. Dragonflies are among the fastest flying insects in the world and with two sets of wings have the ability to fly in any direction. Globally there are over 5500 species. UK species include hawkers, darters, skimmers and chasers. They lay their eggs in water where they hatch into their larval form known as nymphs and spend up to five years feeding on other small water insects. Another unusual characteristic is that they breathe through gills in the rectum and can propel themselves out of danger by expelling a jet of air from the anus. When the larvae are ready to hatch they climb out of the water where they start breathing through the skin and then complete their metamorphoses into the highly coloured adult form. There are three dragonfly chasers in the UK, the Four spotted, Scarce and Broad bodied. The broad bodied chaser (Libellula depressa) is one of the most common in Europe and northern Asia. It has a light brown coloured body with yellow patches along the sides and dark patches at the base of the wings which have a span of up to 70cms. They feed on small insects such as mosquitos and are generally seen around May and June. Interestingly the body of the male turns powder blue colour with age whilst the female darkens.