This year has to go down in the record book as a butterfly year more particularly after the poor, wet summer of last year which so dramatically affected their numbers. As soon as the warm, dry period started in June butterflies became immediately apparent with orange tips, red admirals and peacock butterflies putting in an appearance. However, many of the other common species, such as the large white, did not arrive in any real numbers until later in July when the air became full of gatekeepers, small tortoiseshells, meadow browns and the large, better known as cabbage whites which appeared in their thousands busily mating and then seeking out any plant of the brassica family on which to lay groups of their bright yellow, pin head sized eggs. Later still there were plenty of the deckle-edge winged commas and the beautiful migrant painted ladies which arrived from their wintering grounds in Africa. In mid August the mixed herbage of the meadows on Outwood Common were alive with the flittering of small, day-time flying moths, grasshoppers, many small unidentified insects and butterflies such as the common blue whose food plants include birds-foot trefoil, black medick and white clover. Another migrant from Africa was the clouded yellow which was spotted by Gerald Sharpe on the edge of the track leading to the cricket pitch. This butterfly, like the painted lady, is widely distributed and in some years they appear in very large numbers, their main food plant is birds-foot trefoil. These local observations are supported by Butterfly Conservation in the recently published results of their Big Butterfly Count survey conducted earlier this year which shows that there were almost twice as many sightings as last year with large and small white butterfly numbers up by 300% and small tortoiseshell up by 388%.

A combination of good ground water levels and the warm temperatures also resulted in a bumper year for fruit production whether it be a huge crop of horse chestnuts, which augurs well for a great season of the favourite playground game of conkers and resultant bruised knuckles, or acorns with which squirrels will fill their stores, or the humble blackberries which glitter like jewelled necklaces as they hang from the wayside brambles. Apple, pear, and damson trees are generally groaning under the weight of a very heavy crop. Our Victoria plum tree was so loaded with fruit that even at the early green stage two branches simply snapped off requiring a number of props under other branches in order to prevent the young tree collapsing. 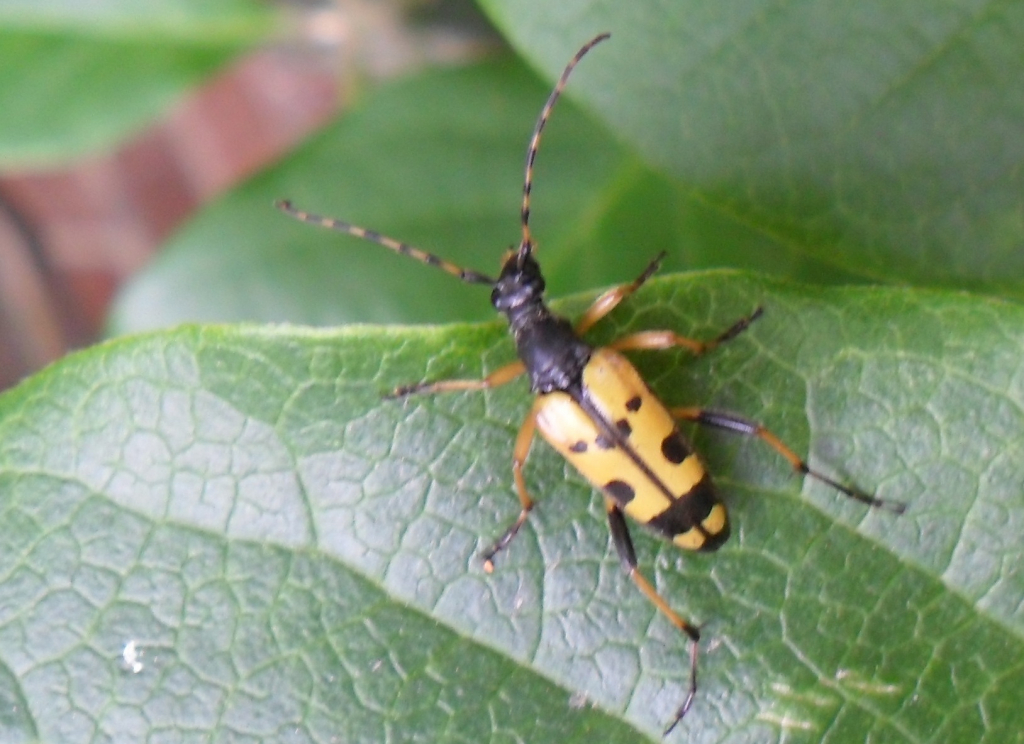 An interesting sighting this month was made by Sue Turner who photographed a Spotted Longhorn beetle (Rutpela maculata) on a magnolia in her garden. This beetle, which has a yellow body with black spots, is between 13-20mms in length, feeds on pollen and nectar, and lives for between two and four weeks. The life cycle is between two and three years with the larval stage spent in rotting wood and feeding on a wide variety of trees.

This year's summer has been a good one with some thirteen weeks of dry, sunny and warm weather but conditions changed suddenly when the temperature dropped from 29ᵒC on Wednesday 5 September down to 18ᵒC the following day and by the 15th of the month the first of the autumn storms blew in from the Atlantic bringing high winds and rain. However, the rainfall will supply the trigger to what promises to be a good year for fungi.